Living in the Shadow

Can I imagine my elsewhere?

Or, if you think you smell a rat, you probably do.

In August 2015 an unusual sight was witnessed by employees on the ground floor of the Vero Building in Shortland St. A cyclist rode onto the forecourt of the plaza – an area usually only occupied by waiting taxis. She parked her bike, climbed the bank and began collecting red seeds from the bordering garden of clivia plants. Dropping these into her bicycle pannier she then rode off up the hill.

Seven months later she returned. This time her panniers contained clivia seedlings, grown from the Vero seeds, which she placed in the ‘public/private’ lounging area, with a small sign reading, ‘Growing the Bonus – Free – Yes – Help Yourself – seeds grown from the Vero Plaza bonus floor public space’.

A couple of weeks later more potted seedlings, with a similar sign, were discovered on the public/private lawn at City Workshops.

What to make of this?

Some Thoughts: Bonus Floor spaces go to the heart of the seductive nature of neo-liberalism’s grand narrative. You know the one, ‘There is no alternative’. Here we have corporate developers negotiating with city councils to gain extra floor space in exchange for creating publicly accessible areas. These areas don’t belong to the public, aren’t managed by the public and few checks are undertaken to ensure that they are genuinely open spaces. When, through acts of determination, you actually discover one, you get a distinct impression that it suits the owners to give every impression that they are not so very public.

Whilst the lack of transparency and genuine commitment gets a bit of airtime every now and then, no meaningful changes to the regime have occurred. Operating in an all-encompassing way, and colonising vocabulary and thought, the neoliberal project appears here as a ‘given’ rather than both an institutionalised and ideological form of power. Because notions of private property and developers’ entitlement are ‘givens’ the City Council–in our name–works with developers to add extra floors to high-rise buildings, promoting the exchange as win-win. Ostensibly a cost free and mutually beneficial exercise, bonus floors in fact carry social costs: Shading of neighbouring buildings and streets, wind tunnels and the creation of a general urban pathology, whereby the genuine pubic realm of the street no longer feels like an inviting place.

If we went back to square one and began to indeed suggest alternatives, we might factor in that high-rise buildings already carry a significant burden to the community, and instead of trading space for space, councils could make it integral to all high rise developments that they be limited to the current planning restrictions, with a proportion delegated public and handed to the council for control and management. The financial cost of building a high rise then falls on the developer, in recognition of the fact that the public already carry the existing social cost. This cost is then genuinely balanced by a social gain – public space.

there is no longer any Temple of the Sun.”
Ivan Chtcheglov, Formulary for a New Urbanism
October 1953, printed in Internationale Situationniste #1

Not only this, but as buildings get taller, less and less sun ever reaches the ground. Developers pile storey upon storey, maximising floor space and high end inner city rents. Space on the ground costs so much money that the ground itself must be multiplied over and over, or it is not counted as having paid its way.

The Situationist International’s critiques of modern cities still feel relevant. Debord’s vision of the spectacle, the always-hungry machine of modern culture, only seems more entrenched now than sixty years ago. The Situationist International, a weird and angry boys club (and Michèle): artists, poets and provocateurs, they set out to understand and change the city for themselves.

A passing observation has stuck in my mind. When I went to see Le Tigre play at the Kings Arms in 2005 (so long ago now), Kathleen Hanna commented with sadness that our little city had grown since she had seen it last, becoming a tall city like all the others.

Protections are in place. The Council makes rules about the ratios of building heights to boundaries, but regularly trades out these rules for higher fees, and if we the people are lucky, some public benefit: an artwork, a walkthrough, a lobby – these are the little-known privately owned public spaces of Auckland city. They are places where one might find a faster way through, out of the heat or the rain, or a place to sit without being obliged to eat only the food that has been purchased here, or a view of the harbour usually obscured by layers of reinforced concrete.

And so, a small group of artists, a weird and angry girls club (and Joe), has come together to situationise the situation, to scope the psychogeography of our town.

We have created for ourselves a heightened awareness of what it is to negotiate a city. Walking through as a track, a record of a time. We have met in fancy lobbies and left behind prelimary guides and seedlings for others to find. Bringing food from elsewhere, claiming public space for shared meals. Witnessing others in their negotiated relationships with the space of the city. A knitting club in Queens Arcade, bring and share teabags, packets of biscuits open on the table.

The Council has bought our rights to be there. They have traded these spaces for larger buildings, exceeding the restrictions of the district plan. Are we angry or are we grateful? At the Vero building we are pretty happy. At the ASB building, we are less than impressed.

In my own practice, I am looking for the extraordinary in the everyday, and this communion with a group of artists, people who by nature and practice think in connection and layers, is a sacred gathering. A small and occasional Temple of the Sun.

As part of the City Loop project

It’s about 4.00 p.m. on a Wednesday afternoon and I am with friends (4 protesters, 4 mildly ambivalent and 1 non-protesting photographer) outside the local council building in the middle of the city holding an empty manila cardboard box. I am standing on the footpath, closer to the centre line, and the cardboard box is medium sized and light yet modestly capable of carrying a small TV. Apart from my friends, I don’t recall many other people on the street at the time. The footpath positioning for our protest is strategic, not just for its public-ness and proximity to the council headquarters, but also because we have gathered in front of a series of six foot high portable rectangular-mesh fence pods on the council property perimeter that refuses entry to the dimly lit public space and thoroughfare (as part of the bonus floor concession scheme) located behind.

There’s no official start time for the protest. It’s part of a longer tour that’s scheduled to conclude in just over an hour’s time so we’re doing ok. And the protest shouldn’t take very long anyway. Actually there’s nothing official sanctioning this protest, as I decided not to apply for any permits. When researching online as to how to apply for the permission to protest, the first question I needed to answer on the council website was, “Is your event open to the general public? If I answered ‘yes’ – then I automatically needed a permit at a cost of $90. ‘No’ – then I had to answer a series of questions to decide if I still needed a permit. Applying this answer to our situation, I decided that since the public weren’t specifically invited to our late afternoon mid-city protest, and that there would be significantly fewer than 100 people present with no amplified sound or food and drinks available, there was no need to apply and pay for a right to a freedom of expression in a public space for this particular Wednesday afternoon.

Unofficially, the protest is about nothing. Or rather, protesting the lack of access and use of a publically defined compensatory open space corridor, offered up in exchange for the council being able to develop more floor space than legally allowed, kind-of-nothing. A council owned and occupied building, home to the design, enactment and enforcement of these spatial rules of use, yet at present with the mesh fence and barred access, unable to show compliance with its own regulatory infrastructure. Or put in yet another way, an unofficial event in a public space, the unidentified occupants of which are exercising a legal right to a freedom of expression – for a limited and unknown duration – in public (somewhere) and in protest at the local government’s failure to adequately maintain and monitor the use of these compensatory public spaces. A protest of and about nothing. 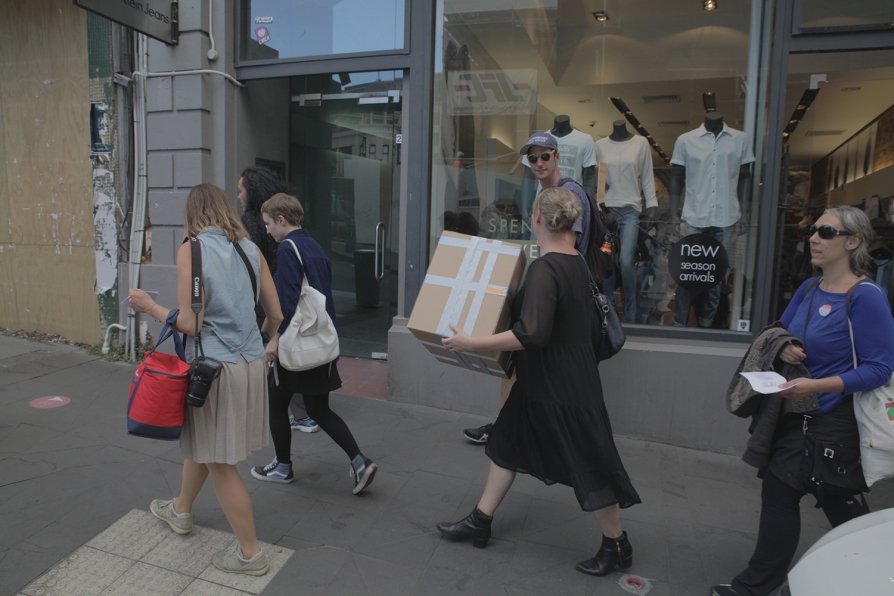